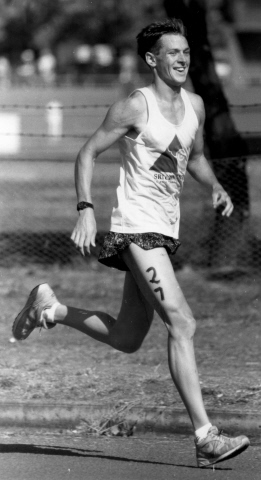 Scott's 1993 Bacchus from the Exies Oval

Scott Green knows exactly what happens on Scenic Hill.  Scott came to town as a fresh, young journo for The Area News.  Scott was a member of our club through the nineties.  Scott ran most weeks on the Hill.  He was a very effective Club President.  He won the Bacchus in 1993.  He was Club Champion multiple times in the good old days when we ran Triathlon.  Older club members remember him well.  Scott is the most pleasant cyclist I have been out riding with because he never ‘half-wheeled’ me.

Griffith was very early days for Scott’s sporting career.  But while in Griffith he made his first venture overseas to the World Triathlon Championships in Mexico in 2002.

Scott moved to northern NSW and has been very successful in triathlon, cycling and running.

Now Scott coaches.  I am sure he can help you.  Check out his flyer.

All the Trophies & Winners

Yenda Prods Half on the Hill